Each year, Mom and I have a date. We go to the Expo for Her in town and make a day of it. We get there early, of course, so we can get the free goodie bag. You have to get there early because they only give out 100. So we make camp. 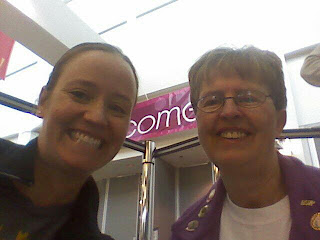 One year, I called Bridget and asked her to bring us lunch because we couldn't leave the line once we got there. The next year we camped out with cribbage, books and snacks and then ran stuff out to the car just before they opened the doors.

This year, we calmed down a bit and just brought a few snacks. I skipped the purse and just carried my water and such in a drawstring bag that I could carry on my back. We end up getting one of those reusable bags, so it's just easier not to carry a purse and have so much more to handle through the crowds. The reusable bag is bad enough.

Once we get inside, we immediately head to a chair area to go through our bag. This year we did stop for wine samples first.  Note to self: If you find a sample you like, buy it right away. I went back today and the wine I liked was already sold out. *shakes head*

The goodie bag actually is worth the time we sit on a cold, tile floor for hours waiting to get in. One year I got a t-shirt. The last couple years we've gotten plants. There's always good samples in and sometimes just fun stuff. This year I got a headband - one of those stretchy ones - and this one actually stays on my head.

But the best part of it all is that Mom and I get to spend some time together. I love these days. It's a nice break from reality and mother/daughter time is always good.

I came home to this today: 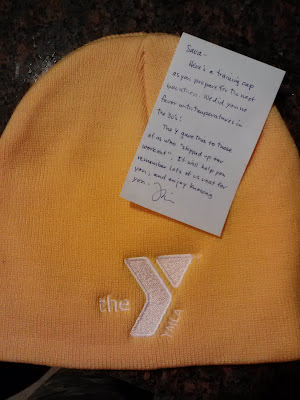 This weekend I did something that I haven't done in a very long time - actually, ever. I ran a marathon without anyone to schlepp for me. In fact, I had no one to even travel with or meet up for the weekend. I don't know that I'll ever do that again. I know some runners can do that, but it didn't work for me. While I don't need someone riding alongside of me throughout the race, having someone to run TO makes a big difference.

Anyway, the weekend started rough. Mike was shingling the shop, so he couldn't come along. I forgot my race packet which I discovered when I was just past the Minnesota border, so I had to turn back. That threw me off. My room was still good, and I had my normal hotel, but I wasn't feeling all that confident. 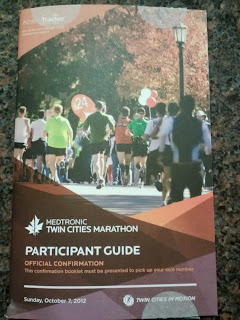 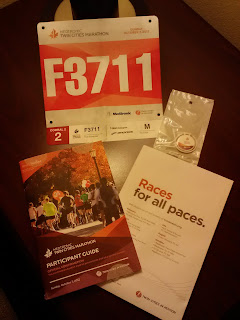 So I went and picked up my packet. I at least had a good race number - all of my favorites: 3, 7, 11. That should have been a good omen. But again, I was just feeling nervous. 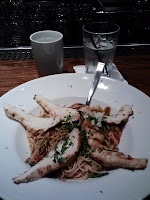 I went downstairs to TGIFriday's for my standard pre-race meal. I ate at the bar because I didn't want to take up a table. The bartender was very nice and introduced himself, shook my hand and then brought me a cup of hot water so I could put my hands around it and warm up. He was very nice. I ate half my meal so I'd have something Sunday for after the race.

The meal was good and the hot water did help my hands. I went back upstairs and laid out my clothes. Of course I brought several options and would determine in the morning what I was going to wear. The weather was iffy. It was cool, which is normally nice to run in, but also possibly a little damp. And since I haven't been training I wasn't really ready for any of it.

The next morning I got up, more nervous than I have ever been for a race - even my first marathon. This one I just wasn't sure what to expect. I got my standards together, checked the weather, checked for extra essentials since I was on my own, and got ready to go. I took my obligatory picture, too. 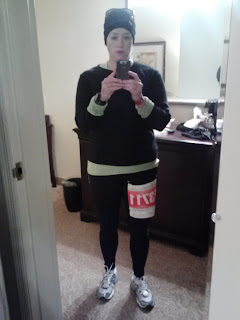 I decided to go with the black t-shirt over top of my standard green top, just because it seemed a bit cool. I also had my headband for my ears. I figured if I had to lose either one, that would be okay. I ended up keeping both.

I rode the train and got to the Dome with plenty of time to get ready, and to be more nervous. TMI moment - I think I pooped more this morning than I ever have before a race. Actually I know that to be true.

I called Mike around 7:30, before I headed to the corral and I was a mess. I probably should have just turned around and went back home at that point, but my Scandinavian stubbornness won out. As I cried into the phone to Mike, he did his best to motivate me and tell me how awesome I am. If only I had believed it.

I stood in the corral and despite the sun, I was cold. I was tense and shivering for the 20 minutes prior to getting to start. I took off slow, not in a hurry at all - just wanting to keep steady. I did really well until mile 5 when I tripped and fell, doing an awesome drop and roll. I got back up and started running again while a race guy came up and asked if I was okay. I said, yes, though my hands, leg and pride were stinging. He encouraged me to keep going and I did...for 100 feet before I had to stop and walk. That fall did not do well for my left side. I'm thankful I didn't take anyone else out in the midst of it all.

That started the downhill slide. Once I start walking, I'm screwed, and I know it. I kept up my momentum, mostly using the sweep bus as my motivation to keep ahead of it - and I did well until mile 23. The van ahead of the bus came up and kept me company for awhile. I tried to encourage them to just stay with me so I could finish on time, but they said they couldn't. I tried to tell them they could, they were just choosing not to. But by this time I knew the inevitable. My right knee was screaming at me, my left thigh was throbbing from my fall  my back was sore from all the time I spent tensing up while shivering, and my heart just wasn't into it anymore. I did my best to run a bit as I could until my knee screamed out in pain, then I'd walk. It was kind of a lost battle and I had no one to help me through, but me. 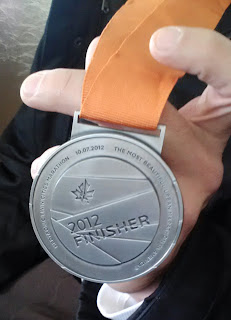 I did finish about 20 minutes over and didn't get a medal, but I did talk the guy on the bus back to the train into letting me take a picture of his so I could at least pretend I earned one.

The bad thing with that is that another guy heard and offered to give me his because he thought it was my first marathon. When I said it was my fifth, then he retracted, which I don't blame him. I didn't earn the medal - but I have a picture which will work for me.

Once I got back to my room I fell apart in tears. I took an ice bath for my knees, checked out my awesome bruise on my thigh, and then took a shower. I felt like a failure and the big thing is it's my own fault. I know I didn't train but I thought I could still get by. Stupid me.

I'm seriously reconsidering running this one next year. I think, for one thing, I need a break. I love my marathons, but maybe I need to just focus on half's for awhile. I need to get into better training patterns, especially running more and to do that I have to get over the whole "I live in the country and there's no where to run" mentality. While this is true and it was much easier to train in the city when I lived downtown, I still can train. I can drive into town and run the paths. I could park downtown and run my hills. I just need to make that a priority and make the time to do it. Until I get my mind set to do just that, I have to realize that my results aren't going to be great.
Posted by ~moe~ at 3:49 PM No comments: